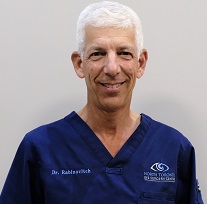 Dr. Theodore Rabinovitch is a fellowship-trained cornea and ocular inflammation specialist with a unique practice focused on both surgical management of cataract and refractive solutions, combined with his respected work in uveitis and ocular inflammation. He is Assistant Professor of Ophthalmology in Toronto, a surgical teacher and former head of the uveitis curriculum at University of Toronto.

Dr. Rabinovitch began his celebrated career as a cataract and laser refractive surgeon in the early 1990s. He is a pioneer in laser eye surgery in Canada, being one of the first surgeons in Toronto to perform PRK and LASIK and has been an established LASIK surgeon over the past 25 years. Throughout this time, he was a lead physician at the Toronto Laser Sight Centre, then continued on to achieve prominence as a staff surgeon and Head of Clinical Research at the Herzig Eye Institute, where he performed thousands of successful cataract and LASIK procedures. He has provided surgical expertise for cataract, LASIK and cross-linking at TLC Laser Eye Centres for 10 years.

He is Past President of the Toronto Ophthalmological Association, Chief of Ophthalmology at Humber River Hospital and sits on the Kensington Research Committee and on the Steering Committee of the Canadian Cataract Institute. He is the medical director of North Toronto Eye Care and the North Toronto Eye Surgery Centre, a large general and tertiary multi-disciplinary practice in the Greater Toronto area. Dr. Rabinovitch performs surgery at North York General Hospital, Kensington Eye Institute, North Toronto Eye Surgical Centre, and TLC Surgery Centres.

In addition to his extensive experience in laser vision correction, he has a wide-range of medical and surgical accomplishments which have earned him a reputation as an authority in several fields, including corneal surgery, intraocular and extraocular inflammation, and ocular surface disorders. He is one of Canada’s leading surgeons in cataract and lens implant-related surgery, performing both traditional and bladeless Femtosecond Cataract surgery for over 30,000 patients.

He has been involved in several phase 3 and 4 FDA studies, including uveitis, refractive and cataract surgery. Dr. Rabinovitch is a member of the KEI Corneal Cross Linking Study, currently in its last few months of enrollment. He is a well-known teacher, lecturer, and researcher throughout Canada and the US, bringing his unique presenting style and expertise to impart to us some of his pearls of wisdom regarding uveitis and cataracts.

Dr. Rabinovitch received his Medical Degree from Montreal’s McGill University and completed his Ophthalmology residency there. He went on to complete a two-year, post-doctoral fellowship at the world-renowned Francis I. Proctor Foundation at the University of California in San Francisco, where he was trained in the most advanced micro-surgical techniques and specialized in the treatment of external eye conditions and rare ocular inflammatory diseases.

As the Director and Founder of North Toronto Eye Care, Dr. Rabinovitch brings top medical expertise to Toronto. He has served continuously as Chairman of the Toronto Ophthalmological Society since he co-founded it in 1991. Today, Dr. Rabinovitch is a lecturer and researcher for the Department of Ophthalmology at the University of Toronto. He has also served as a fellow, Professor and panel member at a number of high-profile academic and medical institutions, FDA, University of Toronto, and Humber River Regional Hospital. He speaks both Hebrew and French. Dr. Rabinovitch has enjoyed the benefits of the laser vision correction first-hand since receiving the treatment himself in 2004. An avid outdoor enthusiast, the procedure allowed him the freedom to participate in activities with his wife and sons – including climbing Machu Picchu, taking photographs in the Galapagos, swimming in the ocean, biking mountains, and skiing around the world – without dependence on glasses. Talk to him today about how you can enjoy the same freedom!